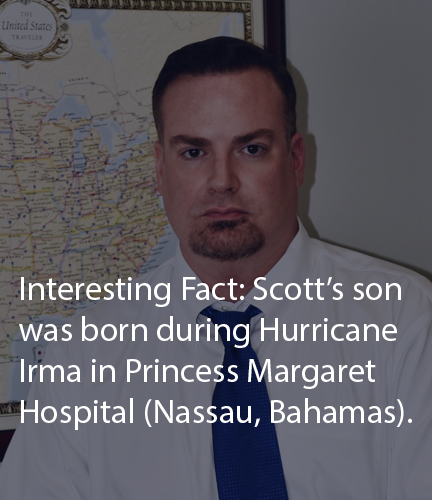 Mr. Owens is the founder of Scott D. Owens, P.A., known by members of the legal community and the media as one of the premier consumer protection law firms in the State of Florida. Since 2011, Mr. Owens has devoted his legal practice solely to defending consumers against intrusive and unlawful methods employed by retailers, debt collectors, telemarketers, spammers, and other unscrupulous businesses. His deep commitment to pro-consumer litigation was spurred by working for a debt collection law firm, where he witnessed how deceptive and aggressive business practices burden the lives of average citizens. Now, nearly twenty years later, Mr. Owens serves on the National Consumer Law Center’s Partners Council with some of the most well-regarded attorneys in the United States.

Mr. Owens litigates class action law suits in both state and federal courts across the United States, focusing on violations of FACTA (Fair and Accurate Credit Transactions Act), the TCPA (Telephone Consumer Protection Act), and the FDCPA (Fair Debt Collection Practices Act). In most of these cases, Mr. Owens has recovered substantial monetary awards for the class, from hundreds of thousands to tens of millions of dollars. Two of Mr. Owens’ most prominent cases include the largest FDCPA settlement in Florida, which obtained over $5 million in debt relief and monetary compensation for its clients, and one of Florida’s largest TCPA class-action suits at the time, in which he recovered $11 million in damages for the class, and a $30.9 million dollar FACTA settlement, the largest ever in the United States for that type of violation.

In his spare time (yeah, right), Mr. Owens and his wife chase after their precocious 3 year old son. Mr. Owens also serves on the Board of Trustees for Temple Beth El of Hollywood, Florida.